The mining business is growing but the quality of life of the communities has worsened considerably. They have denounced abuses of their human rights and the destruction of their territories for over forty years now. Every day they face consuming contaminated water and diseases caused by the presence of toxic metals in their blood. 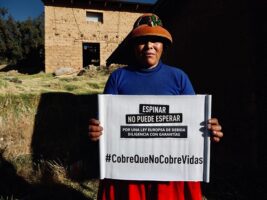 Espinar is one of thirteen provinces situated in the region of Cusco and is one of the territories that has been most affected by mining in Peru.

As the years have gone by, social conflicts due to uncontrolled exploitation and the expropriation of land have intensified.

In parallel, living conditions in the communities have worsened considerably.

And despite the fact that the communities have made attempts at dialogue, the answers have always been empty promises made by the mining companies.

Moreover, the Peruvian authorities have not been capable of regulating the situation or of drawing up plans of action to avoid the extreme situation currently faced by Espinar’s population.

This lack of responsibility towards the lives of the people of Cusco is at the origin of a series of conflicts, contamination and health problems for the province’s inhabitants.

This is all due to heavy metals that cause death as a result of various diseases.

In fact, since 2010 different specialised studies have been carried out, including one by the Ministry of Health, which show the presence of toxic metals in the blood of the inhabitants of Espinar.

This was confirmed recently by an investigation undertaken by Amnesty International in collaboration with the organisation Human Rights Without Frontiers and the environmental health expert Fernando Serrano of the University of St Louis, Missouri.

The report, entitled “Failed State of Health: Health Emergency Among Indigenous Peoples of Espinar, Peru”, presents data collected between 2018 and 2020 in eleven indigenous communities located in the area of influence of the Antapaccay Expansión Tintaya – Integración Coroccohuayco mining project, owned by the Anglo-Swiss transnational company Glencore.

Glencore has been embroiled in corruption scandals. In fact, this May the company was found guilty of corruption in Africa and South America, and of manipulation of the oil markets.

Furthermore, the company denies its responsibility for the problem.

However, the results of this investigation, in which laboratory experts were hired to collect blood and urine samples from 150 volunteers from the communities, show that the contamination is real and that the people living in Espinar are suffering as a result.

The results published in this report are alarming. They show how 78% (117 people) presented levels of metals and toxic substances above the reference values, which represents a health risk. 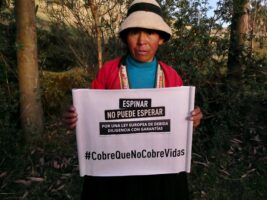 Furthermore, over 58% presented high levels of arsenic in their organism. This mineral can cause nausea and vomiting as well as abnormal heart rates and a reduction in the number of red and white blood cells.

Other notable findings show how more than 29% presented raised levels of manganese in the body, which can be toxic and accumulate in the brain, bones, liver, kidneys and pancreas.

Likewise, 115 samples of water used for human consumption that were tested for total coliforms were found to be positive, which means that the water is not clean and safe.

All this information has been shared both with the mining companies and with the Peruvian authorities. The answers from both have been insufficient and have not led to any type of regulation to solve the problem.

Social conflict due to mining dates from the 80s when the initial tension between Espinar’s population and the ‘Tintaya’ mining company became more intense.

This came about in the wake of the beginning of extractive operations and the state-owned business Etaminsa deciding to expropriate 2,368 hectares from the Anta Cama landowners.

Since then, the violation of human rights has been continual. That is why the different districts’ communities organised protests demanding the state’s presence in order to guarantee their quality of life.

But on 21st May 1990 the situation reached a tipping point. On that day, demonstrators took a group of mining workers hostage.

After several months of negotiations, a financial investment in the province was made for the development of rural electrification, textile production and agriculture projects.

However, in 1993 Alberto Fujimori’s government began the process of privatising mining, in which foreign companies acquired extraction projects.

Since then, the mining business has grown but the communities’ quality of life has worsened considerably.

Mining in Peru represents 10% of GDP (Gross Domestic Product) and 60% of the country’s exports. In May 2022, Peru’s Ministry of Energy and Mines recorded a 12% growth in mining investments.

However, Espinar has not benefited from the progress that is supposed to result from the mining activity. In 2017, according to data from the Ministry of Development and Social Inclusion (MIDIS), 46% of people in Espinar continued to be poor, 17% lived in extreme poverty and only 37% were classified as not being poor.

The importance given to this income source is not surprising, to the extent of ignoring the basic rights of the communities that inhabit the territories with mining operations.

That is the reason why two human rights defenders from Cusco, Esmeralda Larota, a member of the K’ana indigenous people, and Karem Luque of the local NGO Human Rights Without Frontiers, began a tour from Espinar in June.

It relates to an international campaign called “Espinar no puede esperar” (Espinar can’t wait) calling for clean water and the protection of the human rights of the communities affected by mining in Peru. 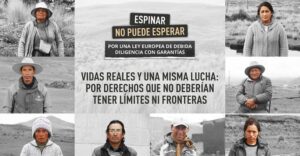 The visit to London was organised by the Catholic international development charity (Cafod) and Peru support group. During the meeting, Esmeralda and Karem spoke to The Prisma about the situation in Espinar and recounted their experience and struggle over all these years. This conversation and its allegations will be included in next week’s edition under the title: Espinar: death and destruction of territory.

(Translated by Philip Walker – Email: philipwalkertranslation@gmail.com) – Photos supplied by the international campaign “Espinar no puede esperar” and authorised for publication.