Disappeared. Yes. Bernardo Beltrán Hernández worked in the cafeteria at the Palace of Justice in Bogota at the time of the taking and retaking of the building on 6th and 7th November 1985. He was 24 years old when he was “forcibly disappeared, tortured and murdered”.

“Bernardo was a tall, dark young man, with an abundance of black hair and a tidy appearance,” his sister, Sandra Beltrán Hernández, remembers.

He was the third of six siblings and had been working at the Palace of Justice for two months and six days when it was seized by the M-19 guerrilla group.

As his sister, “I say that this was not a taking and a retaking – for me there were three takings: the first carried out by the M-19 guerrilla command; the second by Colombian public forces (the police and army who entered, supposedly to rescue the hostages); and the third, by the police and the army at the Legal Medicine Institute (the Colombian state forensics institute), where they put arbitrary things in place, without following protocols in the necropsies and removal of corpses, and hid evidence”.

It was midday on that 6th November. Sandra was at the market when she heard on the radio that the M-19 had just entered the Palace of Justice. She left everything and ran home. She switched on the television, but there was no news about what was happening. Some time later, they discovered that the then Minister of Communications, Noemí Sanín, had ordered that all broadcasting be suspended, replacing it with a football match.

“I called my mother, who was working as a seamstress, but calls were not allowed to be put through, so she did not know what had happened until half past two in the afternoon.”

By then, her father, relatives and neighbours were gathered together, waiting for news on the radio. 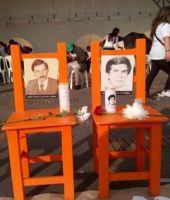 “They told us not to go near to Plaza Bolívar, but you could hear shots and people’s shouts on the radio,” Sandra recalls.

They saw the first hostages leaving on the television at about four in the afternoon: a human chain guided by soldiers, which left the Palace of Justice and went to the Casa del Florero.

But they still did not see Bernardo. They also received “a call from Dr. Meléndez, who worked at the Rotary Fund and was helping Bernardo to find a better job. He told us that he had seen Bernardo leaving alive and that he was taken to the Casa del Florero”.

“That night our father waited outside until five o’ clock in the morning,” Sandra recounts. Early the next day, her parents and two older siblings when to the Plaza. When they arrived, everything was cordoned off. In anguish, her mother approached a soldier and asked about her son. They were told that they should go to the north corner, but there they were only shown lists of people and told that no one was being detained.

Still Bernardo did not appear.

The family began to organise themselves to go to the Legal Medicine Institute, clinics, and all the places that they said on the radio that the wounded could be.

For two weeks, her father visited the Legal Medicine Institute, without success.

“He and other family members were able to see the incinerated bodies, cadaver by cadaver, bag by bag.” But at that time, they did not know that there was an adjoining room that housed ‘special’ cadavers, “for Magistrates and alleged guerrillas”. 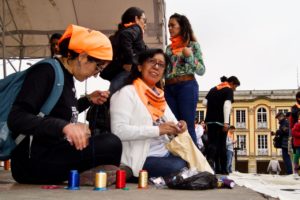 Every day from five o’ clock in the morning until night they were committed to the search. “They returned exhausted, hungry, cold, in pain and with no hope of finding their son,” Sandra recalls.

By going and returning to the same places, they realised that they were meeting the relatives of the others who were forcibly disappeared from the cafeteria.

They exchanged phone numbers in the hope that, if one appeared, the others would follow. In fact, in the conversations they had, the Rodríguez and Guarín family told them that when they went into the cafeteria on 7th November, everything was intact. The till was open and empty of money, and there were no identification documents or changes of clothing.

At that time, the only legal door open to them was the office of lawyer Eduardo Umaña Mendoza: jurist, lecturer, humanist and professor at the Universidad Externado in Colombia. They met with him every two weeks. 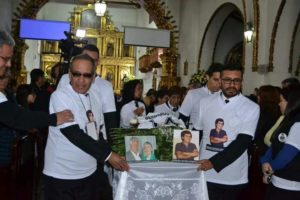 Soon, the tribunal formed by the state to ascertain the facts, asked for proof that Bernardo worked in the Palace of Justice.

They both managed to find the woman in charge of the records, who, after some encouragement, confirmed this.

And the talk of disappearance began, “an issue that we did not understand, or know existed in Colombia,” says Sandra.

But their lawyer, Umaña, together with Josefa de Joya, then President of ASFADDES (Association for Relatives of the Detained Disappeared), successfully had enforced disappearance, which was previously not criminalised, included as a crime under the Constitution.

They also approached media outlets, asking to see the recordings, but were told that these were with the court of inquiry. They made calls from the Office of the Attorney General, asking to see the videos and objects that had been collected, without success.

Amid all this chaos and desperation, Sandra’s father was hit by a car. He recovered, but three years later he suffered a heart attack that left him in intensive care for two weeks. 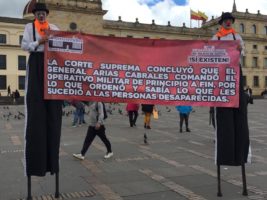 Sandra tells how, from the start, nobody wanted to talk about the issues. Only years later did they discover that there was a “pact of silence” among those who intervened. Thirty-four years on, this pact remains intact.

The years passed, with clues that led nowhere and false hopes at every step.

They received some tapes, which were added to the investigation, but were lost in the courthouse. The transcriptions would be found years later and provided to the Office of the Public Prosecutor. But the psychological consequence of having lost a family member and the enduring uncertainty deepened year after year.

“My father gave up driving because he thought he saw Bernardo in the street. He apologised because he drank a lot, but he told us that it was the only way he could sleep at night,” Sandra explains.

For her part, her mother suffered with her back and diabetes, which began to wreak havoc, causing her to lose her sight little by little. “There was no church in which they were not on their knees, asking that Bernardo would return home.”

(Translated by Rebecca Ndhlovu –  Email: rebeccandhlovu@hotmail.co.uk) – Photos provided –and authorized for publication- by the interviewee