He was an activist in his home country, Colombia, from where he fled in his early twenties. Today, whilst receiving xenophobia from British police, he campaigns for Iraq, Cuba, Palestine, the working class but mainly Colombia. And he tries to educate new and future activists. 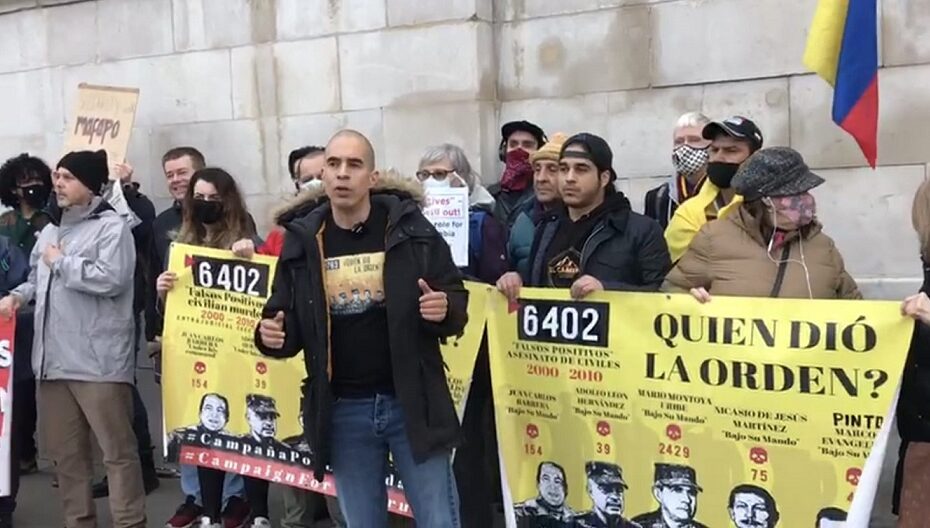 Research from the Home Office in 2000 outlined that stop-and-searches were rarely effective in tackling crime and stimulated a high rate of unproductive searches of ethnic minorities.

Yonatan arrived in London in 1997, during his first six months he was stopped by the police three times.

“I did not realise at that time that being stopped three times in six months is too much. Now I know that it is because of refugee hostility, they knew we were there and that was why they were stopping us”, he says.

“I had just arrived from Colombia, so I was used to being stopped by the police all the time. So I thought ‘Wow, they didn’t beat me up, they just stopped me’, which was a ‘big step forward’, I thought that was a good thing”, he explains.

In the 1990’s Colombia’s recorded deaths from political violence were very high, in 1992 human rights groups registered over 4,100 deaths in 1992 as a result of state brutality. 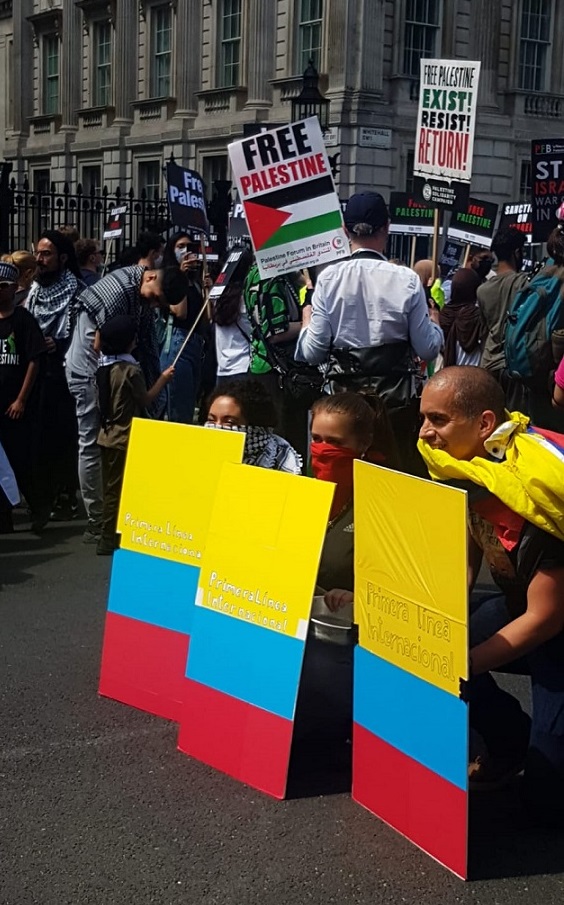 Yonatan Mosquera, one of the main organisers of several human rights campaigns, spoke to The Prisma about the struggles immigrants face daily and the significance of activism.

What do you think are the main struggles that immigrants face in the UK?

I think the immigrant working class share the same struggles as the native working class: the working conditions, the deterioration in jobs and wages. But ours are more intense for the fact that they are immigrants.

It’s about controlling the amount of people who come in and about making sure those who come in, come in without confidence.

Every time one of them is deported there is a shiver in the community because word goes around, and people are becoming scared. Many, many times, especially in the last few months with the mobilisation in Colombia, I have heard people say: I can’t go to a protest because what if the police ask for my documentation.

So, we have had to do a lot of education on the right to protest. You don’t have to speak to the police. Do not say anything. Do not tell them your name, definitely do not tell them about your immigration status. They have to arrest you first.

There was an occasion where all activists from here (in the United Kingdom) were saying it is better for our comrades without documents to live here, not to participate in protests. But that is ridiculous, we need to participate. 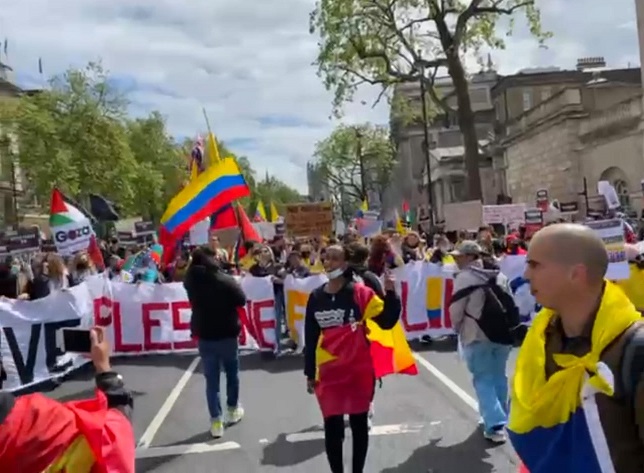 The boss class wants us to be less confident, so we take less wages, do worse jobs and accept worse conditions, which in turn impacts the native working class because if the immigrants are willing to work for less than the native are going to take less.

Are people aware of this and fighting against it?

I worked in the Smithfield Market I was the only foreigner in the shop.

The boss came in and gave me my wages and it was less than my white colleagues.

I always believe you should show your payslip to your colleagues, the fact that the boss doesn’t want you to show tells you that you should definitely do so.

After I showed them, they said no, this is less than what we get, and they got the union involved and they say “We need to pay him the same amount as the other beginners”. 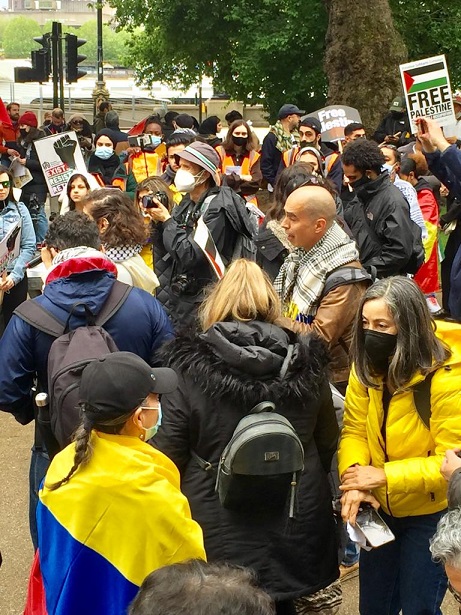 This was the explanation of white guys of British nationality, defending an immigrant’s right to earn the same as them.

Do you think the British government are doing enough to help Colombia?

This is another thing that some of my colleagues, especially the new ones, have a lot of illusions about.

They somehow think that the UK is somehow a force of good and somehow the UK government is going to somehow help the Colombian people.

People have certain illusions because you don’t see the British police murdering people on the streets or such similar acts.

The UK is hidden from training the Colombian police, they train them, give them money and weapons and they give them diplomatic cover in the United Nations, everywhere.

I think they do too much, they are helping the Colombian police too much.

What they should do is stay hands-off Colombia. They should stop interfering in Colombia. 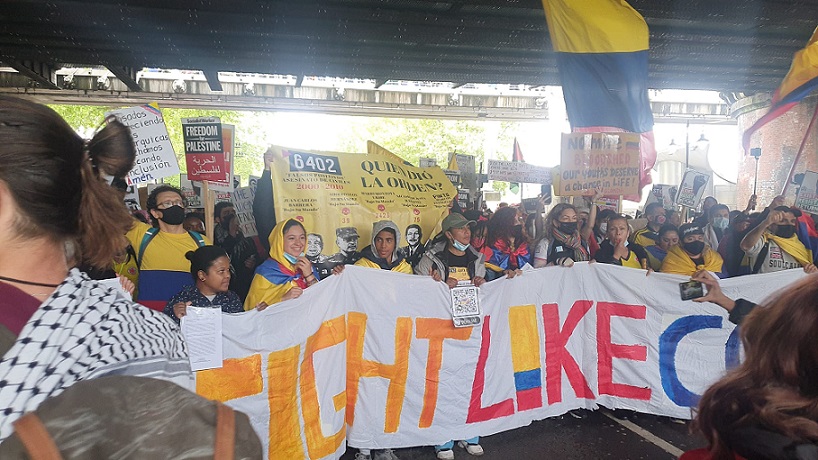 Does this British interference hinder progress in Colombia?

But this is not the main place, the main place goes to US-Americans, the British, the French, the Spanish, the Japanese, Australian, Canadians, all of them.

US-Americans are the people who are usually over there because they have an interest in protecting their own big companies. For me, the main problem is that the working class in Colombia does not have any political leadership just like the same problem with the working class in England, and anywhere else in the world outside of Cuba.

To me the only part of the world where the working people have a party that fights for their own rights and own interests is Cuba. Outside of Cuba we do not have parties, which is a real problem.

If we have a proper party who will fight for our class interest then things would be different. 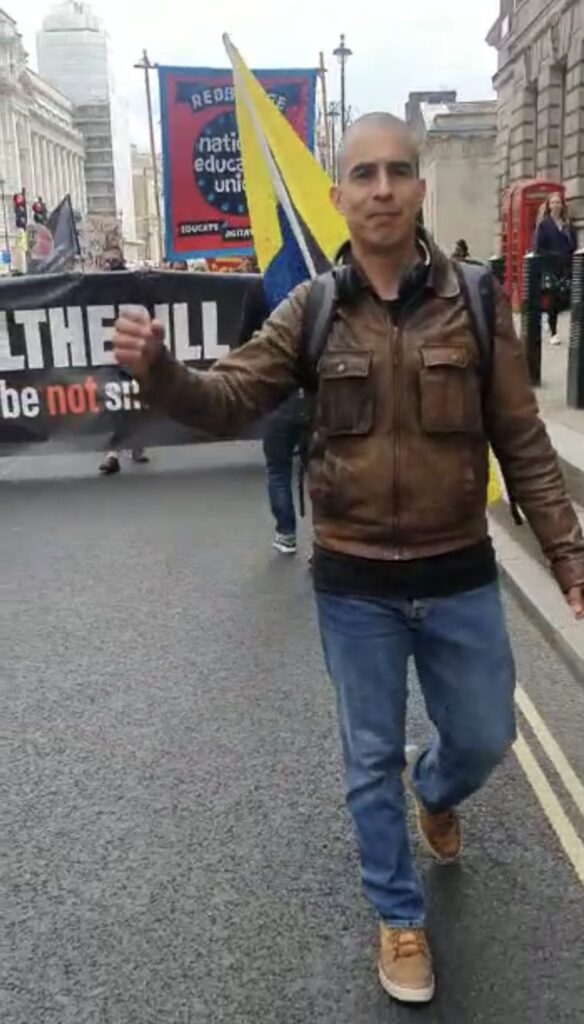 How does it feel campaigning for Colombian rights in the UK?

Some of my comrades think that here we can influence what happens in Colombia, I don’t think we can. I might be wrong but I’m of the opinion that the reason we do it is to show support and give them morale.

It’s a moral boost to show we are fighting for Colombia so they realise they are not alone.

We are only an extension of what’s happening back home if people back home are going to be quiet, they will be quiet here.

The campaign in Colombia is the real deal and we are just supporters. They are the football, we are the cheerleaders.

We can influence things here and that’s what we should do. My opinion is we should get involved in what’s going on here like the campaign “Kill the bill”, that’s more important.